The social standards of modern life have made men and women depilate the parts of the body with normal or excessive pilation.

Traditional depilation techniques such as shaving, cold or hot wax or electrolysis have only temporal results. The development of laser technology gives us the opportunity to deal with the problem of undesirable pilation successfully 100%.

The aim of laser depilation is the melanine of the hairs it is understandable that it is easier to fight fair complexion with dark pilation than dark complexion with pale pilation.

There are some areas where depilation is considered to be easy such as the upper lip ,the chin, the temporal area, the bikini area and the legs in women. In the other parts of the body there might be a certain degree of difficulty in depilation. In some cases the plastic surgeon asks the patient to have endocrinological tests in order to find out where this pilation comes from .we might have a combination of treatment and laser depilation.

Laser depilation lasts only for a few minutes (it depends on the width of the area ) and is repeated regularly. The result is obvious after the first time. Hairs weaken and become fewer until the final stage when all hairs are removed.

As laser technique is improving and our knowledge of the hairfollicles is getting better,laser depilation will ameliorate. 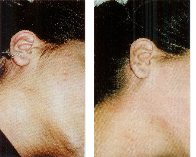 Hairy face and collum of a young girl. A year after the laser depilation(10 sessions)

Broswe our gallery & see the results
in indicative surgeries!